Here it is time for me to rant and rave once again as an old fart. When I first started blogging several years ago, it was suggested that I find my niche – “Niche: a place, employment, status, or activity for which a person or thing is best fitted, i.e., finally found his niche.”

As one might surmise from reading my “About Me” page – I have no true niche. Basically, I have two thoughts that serve as my ‘niche’ – talking about and sharing retirement experiences and ranting and raving on just about anything that crosses my mind. But, there is usually one common thread I weave through anything that I write about and that is – I try to make it comical.

For me, pretty much I am the happiest while in front of my computer attempting to create a piece of writing that is both informative and comical – and for those of you who have been following my rants and raves for some time – I am sure you will agree – at times the information provided is more comical than informative.There is a reason for my madness though and that is with all the negative news floating around the Internet, TV, Radio, Facebook, Newspapers, and whatever other means of communication is available to us: “Enough already” – when do I get to laugh?

With that, allow me to take you into my crazy mixed up world of sayings, signs, and a picture or two. Within the confines of my office one will find all types of mementos that we have picked up over the years, had given to us or are pictures that made us laugh at some silly moment in time. For instance – in the morning if I am not feeling up to par – all I need to do is look at one sign I captured via my camera once and I am ready for just about anything. 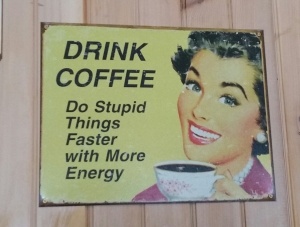 And then there are days where I must do considerable research but don’t feel like it. What do I do – you got it – look at yet another plaque on the wall like this one about studying:

I could go on and on but I should save some of these for another post. Fact of the matter is that we all have our – how should I put it – our “Out of Sorts Day!” Fortunately, I do not have many of those days but when I do, all I need to do is make a cup of coffee, go in my office, sit down in my chair and just reminisce by looking at all the mementos, pictures, and wild and crazy sayings I have hanging there. Before you know it, I am back to my old self – thinking up goofy posts to write about and share with you here so that you can share in my madness too!

Remember: “Growing Old is Mandatory – Growing Up is Optional” and I choose not to grow up. Plus, I would rather be happy than grumpy – and besides, believe me when you get right down to it – it is so much more fun! 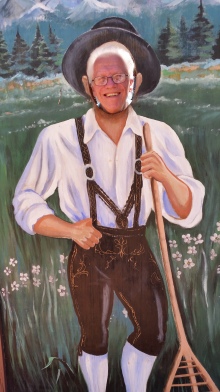 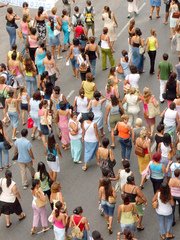 I don’t know about the rest of you, but I am finally willing to admit that, while not often, but definitely in certain instances, men and women act differently. Let’s face it guys, when was the last time you were out in mixed company and said to your neighbor – “Hey Fred, care to go to the bathroom with me?” Such a comment would not be made unless the individual asking the question was three sheets to the wind and has no problem getting a fat lip for his ignorance.

Of course, far be it for me to admit that I know the opposite sex. My wife and I are married fifty-four plus years and at times she still baffles me. What is it with women and yard sales? Don’t they know that the stuff other people are willing to part with for fifty cents is the same stuff we have sitting around our house, except in our house we call them souvenirs – (although I have been known to call some of it “junk” much to the dismay of my wife).  I am definitely not one that believes another man’s trash is going to become my treasure!

But, to each their own – for instance – I have a son and daughter-in-law that live for garage sales, and when visiting we make it a point to go with them on Saturdays making a day of it (Look out Dunkin Donuts – here we come!) And I must admit that on occasion while in their company foraging through other people’s stuff, I actually have found some items of value to me (usually in the form of a book or journal of some sort).

Another reason why I would be the first one to admit that I do not know women – has to do with timeliness. Is it my imagination or is every woman always late getting ready to go someplace? Take me for instance, I love to go for a morning walk basically six days a week (I mean let’s face it – even God rested on Sundays), so I prepare and lay everything out the night before and as a result am ready to hit the door running (or I should say walking – I no longer run anyplace at my age) at about 5:45 AM. Why? Because I know that my morning walk will take me approximately 45 minutes, allowing me just enough time to have breakfast, grab a fast shower upon my return, still allowing me time to dress and be ready to walk out the door at 7:35 AM Monday through Friday.

Why such an early hour say those of you that prefer to sleep late most days now that you are retired? It just so happens that we teach a line dance class from 7:45 AM until 8:30 AM five days a week. More times than not, she runs at least five to ten minutes behind making our trip to the clubhouse which is just five minutes away – a marathon we are trying to win. But, truth be told – we usually get there as the others are arriving and so we aren’t truly late to the party. But, on the other hand, let the occasion be our going to the theater to hear someone sing or perform or perhaps make a trip to visit our daughter and she will be the first one out the door saying to me, “ Hurry up we don’t want to be late!” Priorities – we guys have our priorities!

Here is another example. We have this weekly event that we go to every Saturday morning – coffee and donuts at the clubhouse. The guys sit together at a couple of tables and the women sit together at a separate group of tables. That way they can gossip about female things while we guys talk about the important things happening in the world today – you know sports, vehicles, past job escapades and the like.

But the one question that tends to rise almost every Saturday morning is: What are you going to do when you leave here this morning?” Before I answer that allow me to explain a bit about where we live. Living where we do, we are about a thirty minute car ride to a casino. Did you ever give thought to how many senior citizens love to gamble? Living in the community we do, we have several couples that definitely look forward to going to the casino after coffee on a Saturday morning. While one particular couple actually goes to “yard or garage sales” most Saturday mornings, I would venture to say many of them prefer to go to the Casino after Saturday morning coffee.

In some instances, once there, they spend the balance of their Saturday feeding the “one-arm bandits” as we affectionately called them back in the day.  One thing I have learned from listening to the stories shared over coffee on these Saturday mornings is just this – in many instances, it is the women that win on the days they go to the casino. Now why is that?

See, I told you I don’t know much about women! 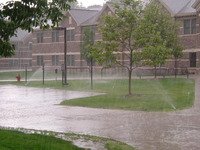 Did you ever want to do something silly with words? Well, not knowing what to write about on my blog today – and being late doesn’t help either – I decided to put together a crazy post using oxymorons.

It is no open secret that if you act naturally people will think that you are as sane as they are. But are we?

As I sit here, clearly confused, trying my best to compose this post, I sit in deafening silence.

It would appear the constant variable in this whole blogging situation is that one attempts to share his or her unbiased opinion of life in general.

Take myself for instance, I am a genuine imitation of a wannabe writer.  I do my best to be seriously funny while at the same time provide readers with almost exactly what I think they might want to read.

It is the only choice I have in this tragic comedy called life and I will give you even odds there is a definite maybe this piece will be an exact estimate of what I wanted it to be.

Minor crisis avoided! The virtual reality of the situation though is I must now give thought to next week’s topic. No working holiday for me.